We are delighted to unveil the latest version of Azendoo tasks: Task Pilot.

With Azendoo, our aim is to make your team more agile, more Zen and more productive. With this in mind, tasks are now simpler and more efficient in their appearance. This new version is an important step for Azendoo, as it represents the point of departure for many improvements that you'll see in the weeks to come. 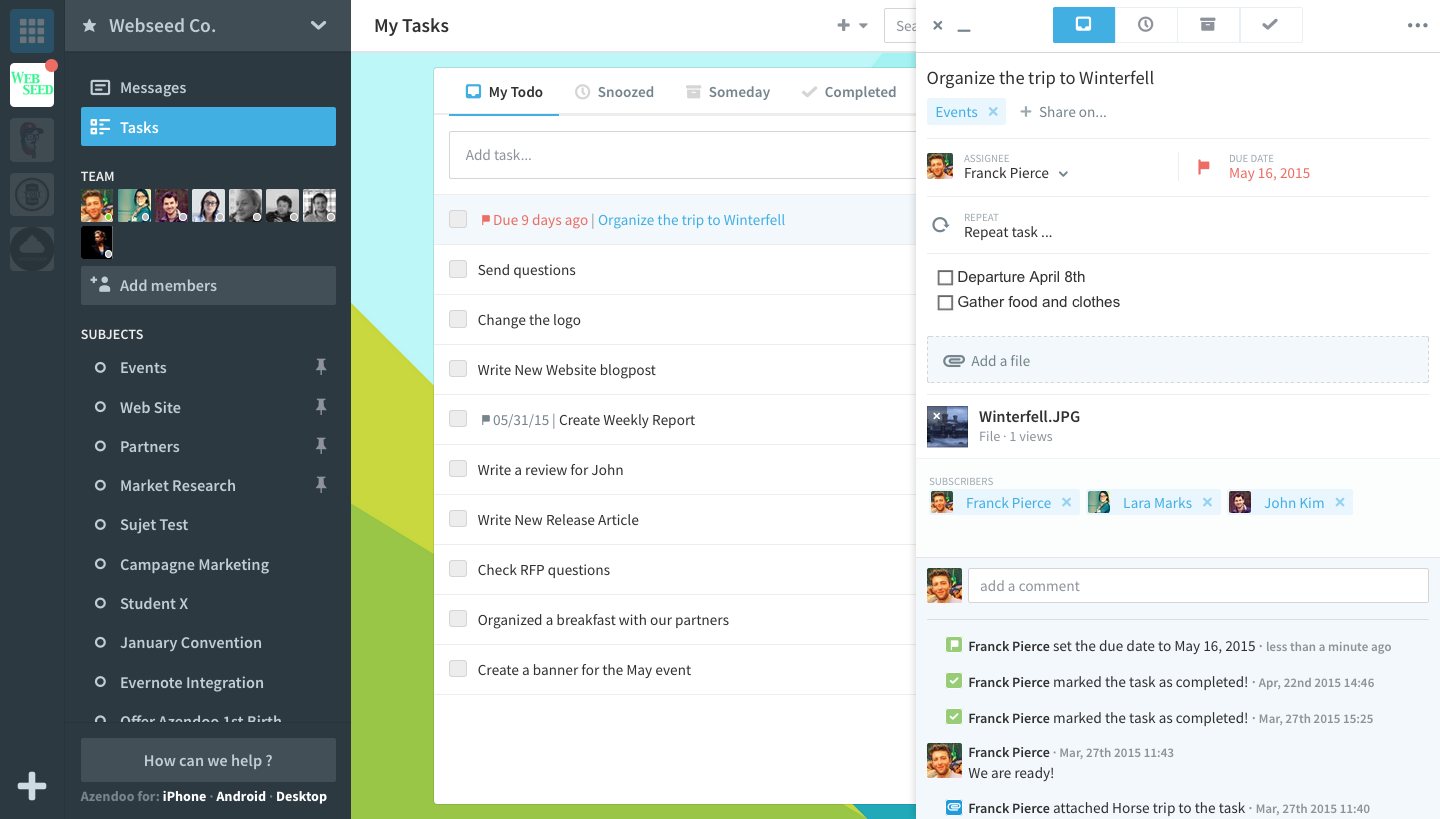 So why this new version?

Azendoo now has more than 300,000 users across 160 countries and yet, in the last few months, we have rewritten 100% of the code in the task manager. We had two main motivations for getting stuck into totally rewriting the code:

What Task Pilot has improved:

To simplify your view of the work you have to do, we have created four task statuses that can be found throughout the Task Pilot:

Tasks that you have to do. These tasks belong to your list of tasks to do that you can organize according to their priority or by another system.

Tasks that will make it onto your ToDo list later on at a date or hour in the future, or tasks that are recurrent.

Tasks that are no longer needing to be done or that have not been completed but that you want to keep noted (just in case).

Tasks that have been finished.

With Task Pilot, your personal ToDo is now in one single list (formally listed as Today and This Week). You can still sort your tasks using drag and drop, again according to priority or another system. Now it is also possible to postpone a task until later: until this evening, tomorrow, this weekend, or indeed until a much later date of your choosing e.g. 15th December. You can do this directly from your ToDo list, and without opening the task itself. 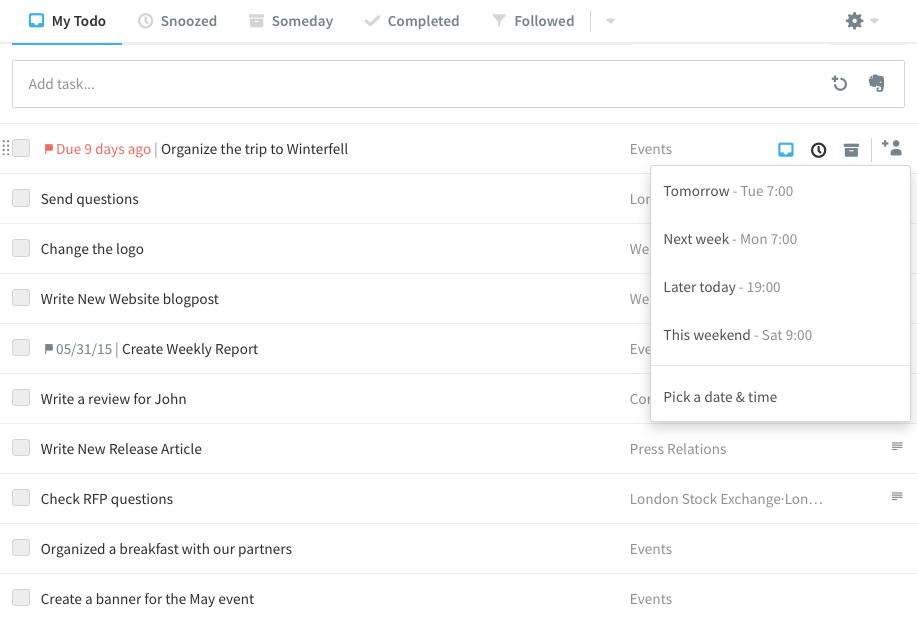 You can see all the tasks that have been postponed until later under the rubric “Snoozed” (see below). The tasks are ranked by date, enabling you to see the next forthcoming tasks at the top of your ToDo list, whilst retaining a vision of those that will be due in the more distant future – tasks that you have scheduled for next year, for example.

If a task has not been finished and no longer needs to be finished (and yes, that can happen), but you wish to keep a record of the task anyway in order to potentially pick it up again, it needs to be put in the category “Someday”. The view of the tasks to be done “Someday” is organized according to the date on which the task was put in this category.

When a task is finished, you click on the icon “Completed”, at the top right of your task card. You can find all your finished tasks under “Completed”.

These four tasks statuses are easily identifiable with the four icons that can be seen throughout the Task Pilot.

We have kept the functionality of assigning a task to one single person, for reasons of clear ownership. Clearly acknowledging responsibility is a surefire guarantee of success. But even if the responsibility for a given task remains with one person, it is still possible to participate, to ask for help and to share your work by inviting or by being invited onto a task, by way of subscription to that task.

In Task Pilot, you can easily access all the tasks on which you are participating. The view of the “Followed” tasks is directly accessible from the Task page (at the top of the filters). 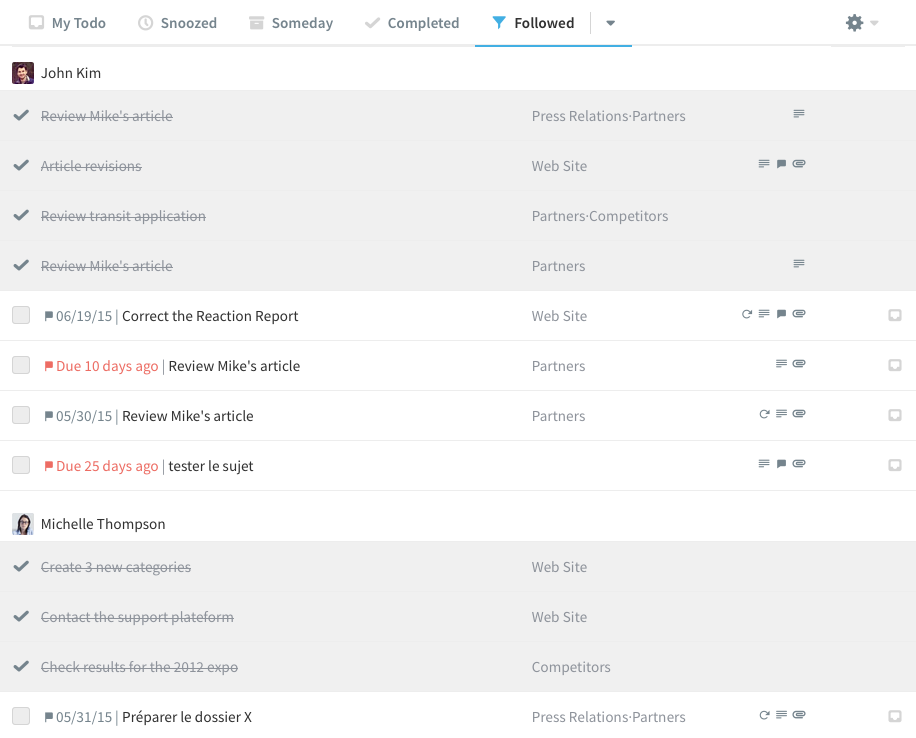 We have also kept and improved the function that enables you to create repeated tasks. The principle is the same as before: once a repeated task has been done, its next occurrence is automatically scheduled and will appear in the correct place under the “Snoozed” rubric.

We have worked to improve visibility in the list of task Due Dates. 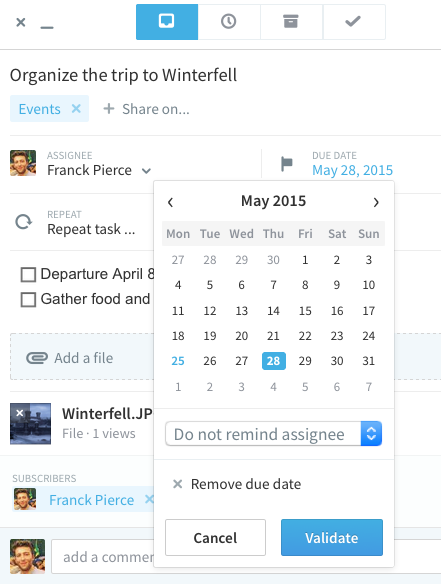 Working and synching as a team

Teamwork can start with a given task, with the possibility to subscribe to or to invite a co-worker onto the flow of discussion and notifications on that task.

The Task View in a Subject is important as this is where, as a team, synchronization and the putting together of an action plan takes place, via the creation of tasks. We have previously seen that each Azendoo user has his or her own ToDo list. For each Subject, it is more or less the same thing; the user has his own list of tasks regardless of their status. We propose to filter this list by default, by showing just those tasks that are yet to be completed, and excluding tasks to be done Someday or Completed tasks. This unique list for the tasks on a given Subject lets you organize all the tasks, according to their priority or by another system. 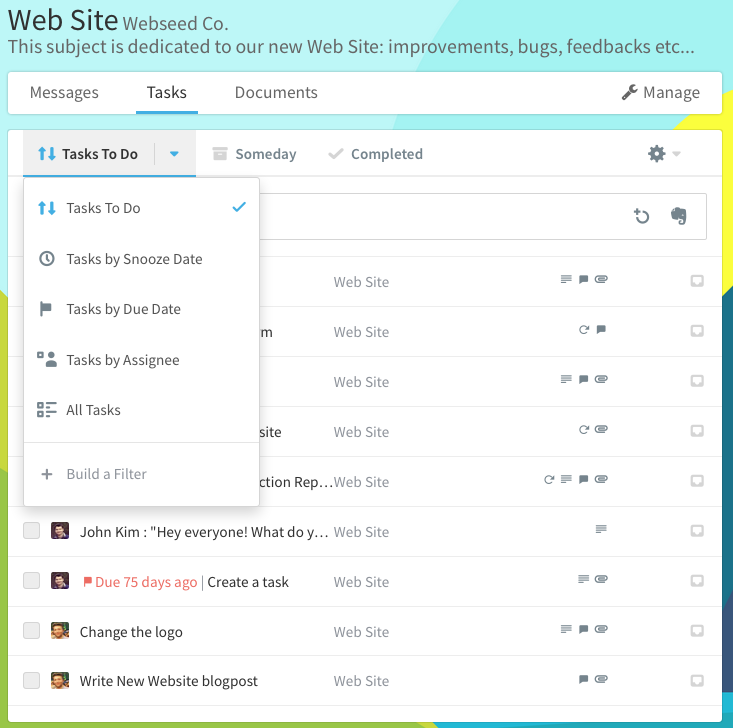 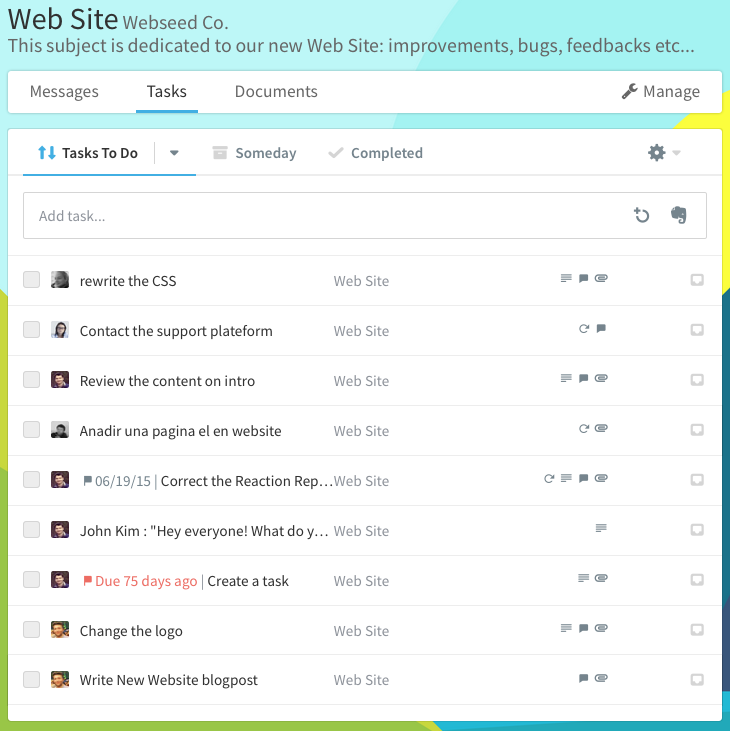 If you wish to see the list of all the tasks on the subject, including those tasks to do Someday or Completed tasks, you can select the view “All Tasks” in order to obtain the following list: 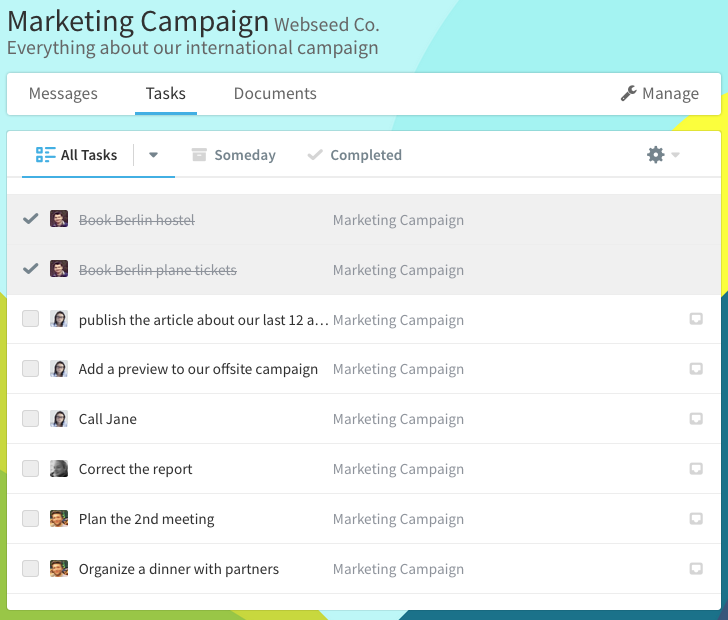 For faster access despite the single list on the Subject, we have chosen to keep the views of the tasks to be done Someday (by date) or which have been Completed (by date).

…Which will happen very soon thanks to Task Pilot.

As I mentioned at the start of this article, this version is the basis for some further developments that will take place in the weeks to come:

Don't hesitate to give us your feedback. We love feedback and we will get back to you without fail.

Enjoy your Task Pilot experience! Try it out now 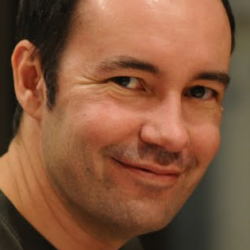